In September 2012, Hopegrown Productions was created by Miriam Cummings, Lindsey Huebner and Samantha Megarry to facilitate a 2013 Fringe Festival tour. Graduating from Concordia’s Theatre Performance program and keen to work together, the project was initiated to help bridge the gap between the academic and professional worlds. We commissioned Montreal playwright and director Harry Standjofski to write us a piece of theatre. The only guideline? Include three dynamic, interesting roles for women. Harry developed a new play entitled Around Miss Julie. Around Miss Julie leads us through auditions, rehearsals and opening night. Four young theatre artists, a director and three actors, work to put up “Julie in a snowstorm”, a new adaptation of Strindberg’s classic. Lyle and Donna are dating - the “Actor Couple”. Ilona’s boyfriend lives in Paris. Julie is unattached, she is the confident director who encourages the cast to tangle with the play… and each other… And a dead bird 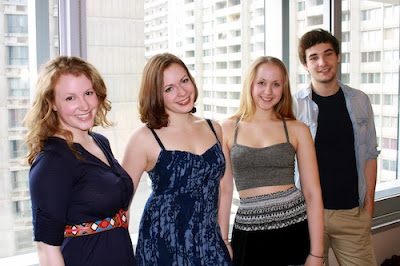 CHARPO: How much do spectators have to know Miss Julie to understand the work?

HOPEGROWN: Knowledge of Miss Julie isn’t necessary to enjoy our play. Around Miss Julie is the story of a group of people putting up a play; the audience learns about the play as the characters learn and the play blurs the lines between rehearsal and reality. Having prior knowledge of Strindberg’s Miss Julie will offer spectators another layer of humour and depth of the piece.

CHARPO: Fringe can be anything and that is both its strength and weakness - how are you getting your message out?

HOPEGROWN: We began spreading the word in Fall 2012, before Around Miss Julie even existed. Twitter, Facebook, Indiegogo and e-mail became our best friends. Our team is pooling all our pre and post University resources, reaching out to the people we worked with in our hometowns, as well as the Concordia and Montreal communities. Since January 2013, we’ve held a number of successful fundraisers and in Febraury, performed at Art Matters Nuit Blanche in collaboration with peers who are also participating in the St-Ambroise Montreal Fringe Festival.

We began marketing ourselves before we had a script; it was clear that it was our job as graduating students to make work for ourselves. We wanted to perform characters who were women our own age and our commitment to making that happen became Hopegrown’s mandate. Essentially, we are our message: relevant women’s stories on stage in Canada, please. As we moved forward with the project, the response to our goal was positive across the board and many of our mentors and peers shared our desire to see more plays which tell young women’s stories. Hopegrown wants to offer something concrete to this need and we want to be leaders for our peers.

Around Miss Julie is about working together and dealing with the tension that arises from creating theatre.

CHARPO: This is very specific material - what kind of Fringe audience are you aiming at?

HOPEGROWN: While the premise of our play is specific, the show really explores the day-to-day experience of young people who are fresh out of school; the show’s humour and social dynamics are universal. Around Miss Julie is about working together and dealing with the tension that arises from creating theatre. Lots of sexual tension.

We’re looking forward to appealing to a theatrical Fringe crowd, including artists and patrons of the arts, who will appreciate nods to the creative process and rehearsal hall experiences they will recognize. A certain amount of maturity is required to appreciate the play due to strong language.

CHARPO: Now you say something very interesting “we commissioned” Harry Standjofski. Tell us about your relationship with this well-known Montreal writer/actor/director.

HOPEGROWN: We came to know Harry as an instructor at Concordia and have since worked with him in the context of classes and productions. Harry stood out among our instructors as someone who was brutally honest about the reality of graduating from theatre school. Namely, that no one is waiting for you to graduate, especially if you’re a woman. Harry has always been upfront about the necessity of creating the performance opportunities you want for yourself.

When it came time to decide on a production, we weren’t interested in staging a play about men that features women; we wanted to put on a play that was about women, their stories and their experiences. This was the only guideline we gave Harry. We feel really lucky that someone so established as Harry is interested in working with us. He’s not only given us a hilarious script but continues to be a resource to our team as we move into rehearsals.

CHARPO: Now please pitch it! Why should Fringers come to your play?

HOPEGROWN: For anyone who has ever worked on a play: see the breakdown of director/actor communication.

For anyone who has ever found themselves in a love triangle: see the grey area of “not labeling it” or “doing the long-distance thing”.

For anyone who has ever been 20-something and wondered what to do with their life: see four young people doing their best to figure it out.