Hopegrown Tour, Part 3, On to the next… Ottawa!
as featured on Bloody Underrated

Ottawa was the first stop on our ʻhometown tourʼ of Ontario this summer. Leaving Montreal meant we were sort of living on the road, although with Lindsey and my parents both based in Ottawa, it also meant staying in nicer houses than our apartments in Montreal. We also left Tara and Sonya in Montreal, which meant I had to start being more organized and take over Taraʼs duties. Becoming the Stage Manager meant that changes to our set and design for each new venue were now up to me. The only way to confirm with Sonya that I wasnʼt ruining her design was through anxious phone calls and e-mailed photos. 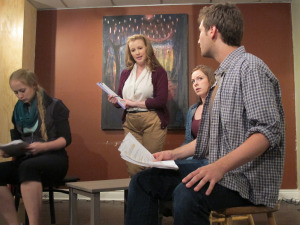 On Monday, the evening following the close of the Montreal FRINGE, after moving out of Montreal and recovering from our hangovers, we walked into the coffee shop in Ottawa where we would be performing. I was the only one who had seen the venue before, so the actors were freaked out. Staging the show in a coffee shop was completely different than Club Espagnol. ‘Tech’ was pretty much turning off fluorescents and playing a CD out of my old walkman hooked up to some computer speakers, which actually made my new SMʼing duties a little less intimidating. After walking through the blocking for a couple of hours, our time was up in the space until our opening Tuesday evening. The actors were terrified. The show went super well. Fear is great.

Sharing our venue with two other Ottawa Fringe shows was a great way to come into the Festival late. We owe a huge thank you to the boys at May Can Theatre and Backpack Theatre for helping us with every set up, take down and everything in between. We also want to thank them for being good-looking (#artcrush) and talented. These two groups put up shows they had written themselves and kicked ass. I seriously hope to be working with these dudes in the future.

Presenting a play in Ottawa for the first time since high school was weird. Coming back immediately after finishing school also meant it was an opportunity to show people why I chose a BFA. Like saying, “Hey, remember those four years of learning to walk, breathe and talk? This is what I learned to do.” So to all those people who sneered at my choice to study theatre I said, “Come see this show or shut the fuck up!”

From sharing my own experiences as a 12-year-old growing up far too quickly in the seedy corners of Ottawa at the Beer Tent to promote our show, to running into not one, not two, but three of my ex-boyfriends at the end of Fringe Party, it felt a lot like going back in time. But theatre in Ottawa has developed since I was younger and we were all blown away by the size and enthusiasm of our audiences. I don’t know where I will end up after this extended summer tour but at least now I know that thereʼs a scene to be involved with in Ottawa, albeit one that may constantly remind me of the Ottawa from those unfortunate teenage years…