Beating the Bechdel Test
As posted in Metro.ca

This article appeared in the July 24, 2014 edition of Metro

The start of an acting career carries all sorts of challenges for young women, but London’s about to welcome three who are setting their own standards.

Londoner Miriam Cummings is part of Hopegrown Productions, a theatre group which has three female members determined to play strong roles and tell stories that are relevant to our times.

They’re doing it, too.

“The intention of Hopegrown Productions is essentially to aid in providing good roles for young women on the stage,” said Cummings, who is 23.

It’s all about the Bechdel Test. Coined by Alison Bechdel in her 1980s comic strip Dykes To Watch Out For, it’s a measure of how a work of fiction treats women.

To pass the test, the story must include at least two women, and they must talk to each other — but about something other than a man.

“A shocking amount of film does not pass the test,” Cummings said. “We found a similar thing when we were searching for a play to put on for our first production.

“We were just coming out of our undergraduate degrees, all three of us. We wanted to put on something in the Montreal Fringe Festival. We had a spot. But we felt a bit put out.”

Also involved are young actors Samantha Megarry, from Burlington, and Lindsey Heubner, from Ottawa. All studied together at Concordia University in Montreal.

The trio wanted a “meaty role” for women, but, unable to find one that was good enough or one that was in a show they could afford the rights to, decided instead to have one written for them.

They began with Around Miss Julie, written by Harry Standjofski, and now they’re coming to London with a new play, Lotus, by Caitlin Murphy.

With the poster tagline “You can’t run from your problems once they’ve gone viral,” it’s about the consequences of a gruesome photo appearing on a girl’s Facebook page.

“The method really works,” Cummings said about their determination to gain strong roles for young women. “We’ve kind of adapted the idea of working with playwrights that want to create and produce new work that fits with our method.” 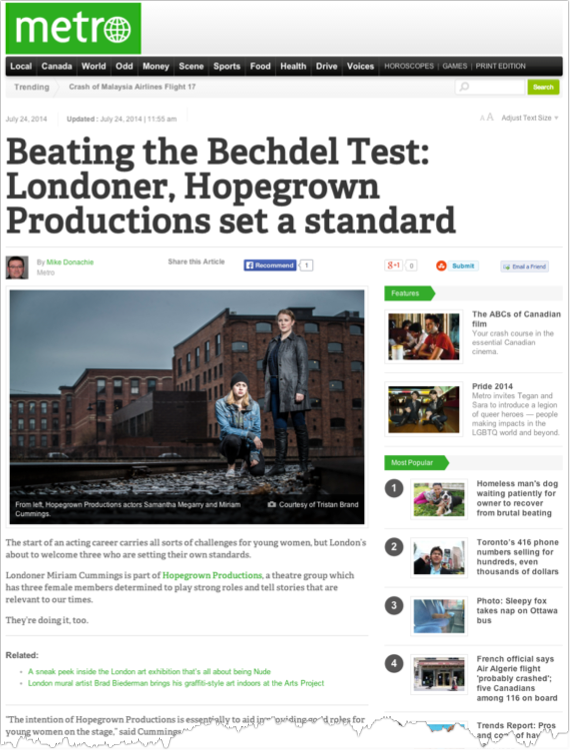