This article appeared in the August 5, 2014 edition of Donald’s Dish

One Hour, plus post-production Q&A

Hopegrown Productions’ presentation of LOTUS at The ARTS Project may be a successful homecoming for the playwright and actors – but it’s by no means a happy one. LOTUS slowly blossoms into a contemporary tragedy filled with sorrow and dark humour that explores contemporary issues in a powerful and poignant manner.

The production opens with Cummings’ Linda desperately engaging in mindless small talk at a Métro station with Megarry’s Amber seemingly equally desperate to avoid it. We quickly learn that the opening scene is merely the play’s dénouement. The rest of the play is a flashback – one in which the conversational dynamic is carried through to its climax.

Ostensibly the play is about Linda, a police officer, trying to learn the truth behind a picture of a dead newborn on Amber’s Facebook wall. But as the production goes on we learn there is much more to the story – rape, bullying, blackmail, and guilt.

The two actors carry the entire production on their formidable shoulders. Playing two dramatically different characters, Cummings and Megarry command the audience’s attention with little in the way of accompaniment other than a couple of desks (representing their respective home lives) and a long table with two chairs (serving as the police station interrogation room). Megarry’s sorrow and bombast are contrasted with Cummings’ dark humour and self-doubt.

Hopegrown Productions presents Lotus (pictured left to right: Samantha Megarry and Miriam Cummings)It all leads to the ultimate reveal. The production’s ‘Rosebud’ is Lotus. And while you can see the reveal coming early in the play, the strength of the two principals’ performances makes it an enjoyable journey.

In addition to the play, the production features pre-performance music. The opening-night show showcased a beautiful performance by Elsie Richmond. Either she, Taylor Holden, Trevor Horman, or the Wasses will be performing in subsequent shows. Cummings and Megarry also interact with the audience post-performance, answering questions about the production, their company, and their art.

LOTUS is a powerful, resonant piece that explores contemporary themes. It has an honesty of characterization about it and it pulls no punches in its delivery. It’s a cautionary tale that never comes across as preachy. In the post-show discussion, Megarry explained that Hopegrown’s mission is to create new dynamic roles for young women. With this production of LOTUS, it appears the company is well on its way to succeeding in that role.

In the end, LOTUS is a homegrown show that richly deserves to be embraced by its hometown. 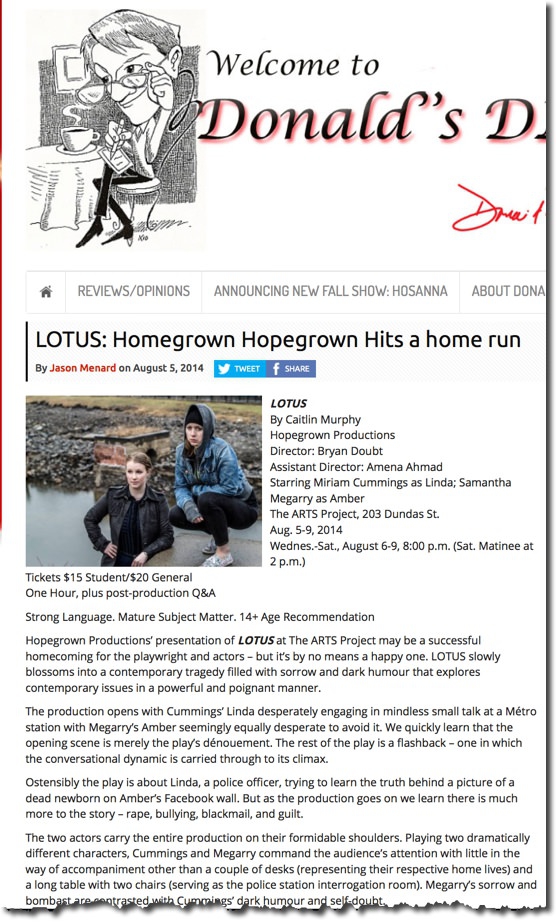