This nice article appeared in the Tuesday, July 15, 2014 edition of The Londoner

Hopegrown Productions — a Montreal-based theatre company founded in part by Forest City native Miriam Cummings — will be making a stop in London this August with a brand new Canadian play by another former Londoner, writer Caitlin Murphy.

LOTUS, a two-hander that explores serious issues about how some teenagers are using social media, is shaped as a mystery surrounding a 17-year-old girl (played by Samantha Megarry), a disturbing photo posted to her Facebook page and the young police officer who decides to investigate (Cummings).

Hopegrown Productions commissioned the piece and debuted it at the Montreal Fringe Festival in June. After a few tweaks to the script, LOTUS will make its next appearance in London at The ARTS Project August 5-9.

“The play itself I think is really important — it’s devastatingly current,” said Cummings, who founded Hopegrown with fellow Concordia University graduates Megarry and Lindsey Huebner. “It’s heartbreaking to keep reading on the news about how much young people are struggling and how technology in so many ways is not helping. It’s taking the mistakes people make in puberty and (making them) last forever instead of being this memory you get to keep and you get to learn from.”

Cummings, a graduate of Lester B. Pearson School for the Arts and HB Beal secondary school, cut her teeth in London with companies like Fountainhead Theatre and Passionfool Theatre. She left for Concordia’s theatre program in 2009, but has done some acting in London over the past few summers.

Last summer, she brought Hopegrown’s first production, Around Miss Julie (another new Canadian play commissioned by the company), to London during a tour that also included Montreal, Ottawa, Burlington, Hamilton and the Edinburgh Festival Fringe in Scotland.

“It’s enjoyable to come back (to London),” Cummings said. The people I worked with here inspire me so much. The theatre I did in London and the people that I met through doing that theatre is what propelled me to want to study theatre in university and gave me the courage to think I could.”

Murphy, the play’s other London connection, has been involved in the Montreal theatre community since 2005. Before that though, Murphy spent 10 years in London where she earned an MA at Western University and began working with the Forest City’s amateur theatre companies.

Local company Theatre Soup recently produced another of Murphy’s plays, Ladies Room, at the London Fringe Festival earlier this summer. That show may be a glimpse into Murphy’s silly side, but LOTUS is quite different.

“It has comic bits, like very dark comic elements, (but) it’s really a drama,” she said. “I felt there was an urgency in talking about the ideas in it and perhaps an urgency in people engaging with those ideas.”

Much like last year, Cummings has some extra content planned before and after performances of the play. She said a local band will perform 30 minutes prior to each show and audiences will have a chance to talk to cast members about the content of LOTUS afterwards.

“It was really well received last year,” Cummings said. “The content of (LOTUS) is really important. It makes me feel good that I’m helping to put out in the world and the Canadian theatre canon work that is so current.”

What: LOTUS by Caitlin Murphy, produced by Hopegrown Productions

Where: The ARTS Project, 203 Dundas Street 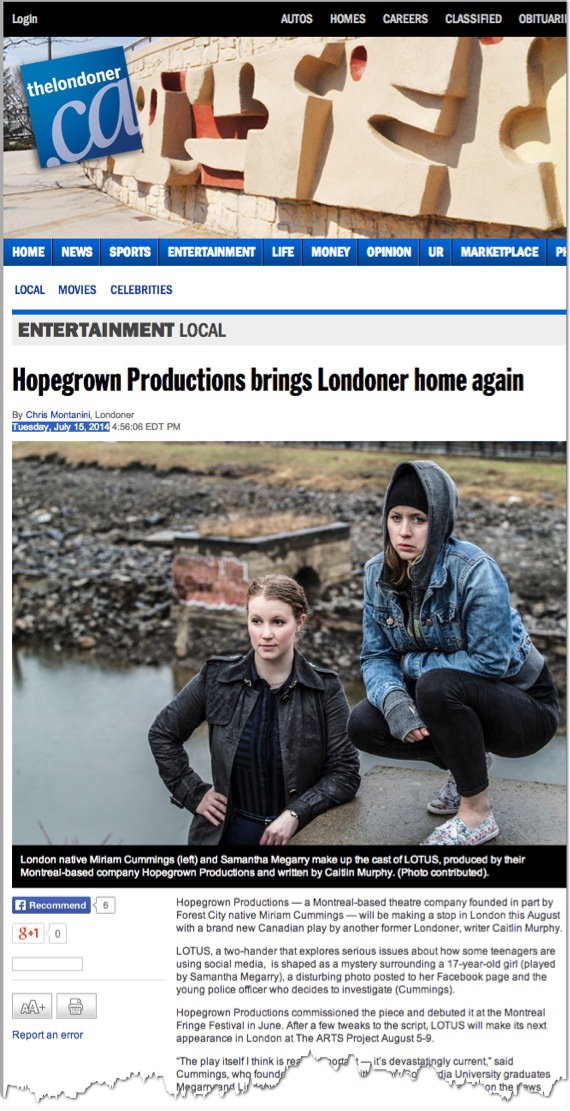