This article appeared in the July 25, 2014 edition of London Community News

In the four years she spent studying theater at Montreal’s Concordia University, and in the time since, Miriam Cummings has noticed a frustrating lack of quality acting roles for women.

Cummings, who grew up in London before leaving for Concordia in 2009, joined with classmates (and roommates) Samantha Megarry and Lindsey Huebner in forming Hopegrown Productions as a way of changing that situation.

“There just weren’t a lot of roles for women,” Cummings said. “I was kind of frustrated with the woman acting as the foil to whatever male character, the wife, the girlfriend, that isn’t my reality. If it is going to be my company, work I stand behind, I don’t feel good perpetuating something I don’t see as current anymore.”

In their first year, Hopegrown commissioned a play called Around Miss Julie by a local playwright in Montreal. They took the production to six different cities, starting in Montreal, before heading to Fringe festivals in London, Ottawa, Hamilton, Burlington, and even Edinburgh, Scotland.

It was an ambitious schedule, but one that paid off with strong sales, positive reviews, and even a Spirit of Fringe Award in Montreal. The victory meant Hopegrown Productions was a guaranteed spot in this year’s Montreal Fringe Festival.

That meant they needed a show to put on. And with the help of another London connection, they achieved just that.

Hopegrown Productions commissioned a story by Caitlin Murphy, who lived in London for about 10 years, went to Western University, and really started her career as a playwright in the Forest City.

The result of that connection is Lotus, a social media-inspired mystery, which will be performed at The Arts Project from Aug 5-9. The production will run over six shows at 8 p.m. nightly, along with a 2 p.m. matinee on the Saturday.

Lotus, which Cummings describes as being “quite dark,” is the story of a 17-year-old girl, who has an incriminating photo show up one day on her Facebook page, and a rather gruesome photo at that.

Cummings, who is also producing Lotus, plays a young cop who becomes “extremely interested” in this picture.

“She’s trying to link it to this young girl. Does it incriminate her? Is she the victim of cyber bullying? I’m finding it difficult to believe this is some kind of Photoshopped picture created as a joke,” Cummings said. “I think it runs deeper. So Lotus is the story of our two characters meeting and working together to discover what the truth of this is.”

Having a play written specifically for the company worked “really well” for Hopegrown last year. So when it came to thinking about whom they wanted to work with this season, Cummings said Murphy was a natural choice.

Cummings had grown up knowing of Murphy, respecting her work, and even having seen some of it first-hand. On a more personal note, when Cummings first moved to Montreal, Murphy was one of the first people she met up with for coffee to find out what was going on.

Cummings approached Murphy first by email first to gauge her interest in working together — and she was. Murphy then went about crafting a show for Cummings and Megarry as Lindsey is currently pursuing her Masters in acting in the U.K. at the Bristol Old Vic Theatre School.

“We both wanted to be in it, playing two exciting, fully developed female characters, in a story that is relevant and current,” Cummings said. “It is very moving. It is a mystery, so I was definitely drawn in. I was surprised in terms of what happens. It is a satisfying mystery in that sense. I felt challenged, in a good way.”

Coming home again to London is “really great,” Cummings said. Having spent so many years in London “under the wings of really talented, really inspiring, extremely dedicated people,” Cummings said it feels right to come back and share with the theatre community that essentially raised her.

Cummings performed at The Arts Project, worked on shows by Jason Rip, with Passionfool Theatre, Fountainhead Theatre and was part of Iglesia Productions first show, Closer. She started off with Original Kids Theatre Company, where she credits Art Fidler with being a big influence on her.

It is that community, and the “huge amount of support” she received from her family, that Cummings credits with not only giving her the confidence to pursue the acting, but the creation of her own company as well.

As excited as she is to be performing in London, putting the show on at The Arts Project felt like the “perfect” choice.

“I can’t think of a better venue in London to bring work that is so close to my heart,” Cummings said. “The staff and volunteers at The Arts Project are just heroes in my book. It just feels right coming back here.”

Tickets for Lotus are available online through The Arts Project website, www.artsproject.ca, or through the box office (203 Dundas St.). Prices are $15 for students, $20 for general audience, and on Tuesday, Aug. 5, Hopegrown is offering a pay-what-you-can performance. 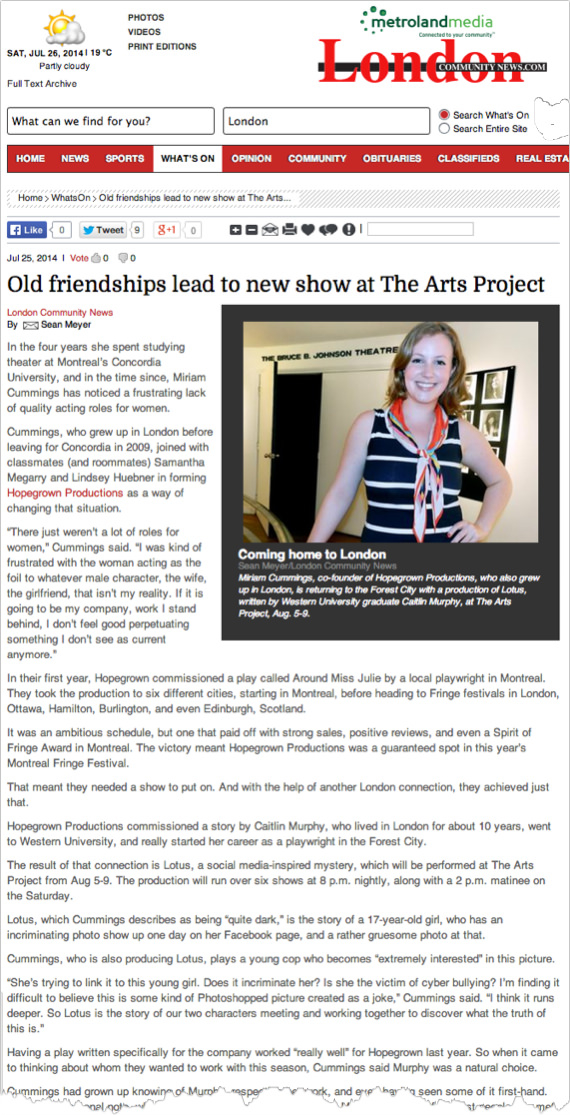