The 12:45 PM Sunday show of Lotus was nearly sold out, not surprising after Hopegrown Productions 2013 Fringe hit Around Miss Julie. I’m sure there was a lot of pressure to live up to the show that Hopegrown Productions put on last year and Lotus is a valiant effort. Written, by Caitlin Murphy, on the heels of cyber-bullying becoming an international phenomenon and the deaths of Amanda Todd and Rehtaeh Parsons, comes the story of Amber, a young girl with similar traumas. Through a mixture of interrogation and providing confidence, rookie police officer, Linda, helps uncover the mystery that is Amber.

LOTUS plays out with an ominous tone. As the play progresses more and more questions pile up for the audience members about what has truly happened and what will become of it. Both Linda and Amber are imperfect characters in a very imperfect world, and despite their flaws they are simply trying to find their place. Amber learns to deal with her trust issues while Linda learns that she’s really not that good of a cop, yet they must make the best of their not so pleasant situation.

The actors, Miriam Cummings (Linda) and Samantha Megarry (Amber) are both very talented and own the stage when they are on it. Their chemistry felt rocky at first, but it quickly became evident that the rockiness was just the way the characters felt towards each other and that chemistry blossomed very quickly and played itself off well.

While Lotus is strong on the performance level I felt a little let down by some of the unresolved plot holes. The play builds itself up to an explosive scene, ending exactly the way it should for Amber, but it really leaves all of Linda’s unresolved plot details hanging in the air. Throughout the play Linda has issues with her mother, who is a bit of a hypochondriac and drives her crazy. Linda also has an irregular relationship with a sun lamp, which she writes off as Seasonal Affective Disorder, but is never spoken of again, despite spending a handful of scenes just sitting in front of lamp while nothing happened on stage.

4-Stars Overall though, Lotus packs a punch. It’s relevant and isn’t afraid to explore the injustice of cyber-bullying. I just wish that there had been a bit more resolution. 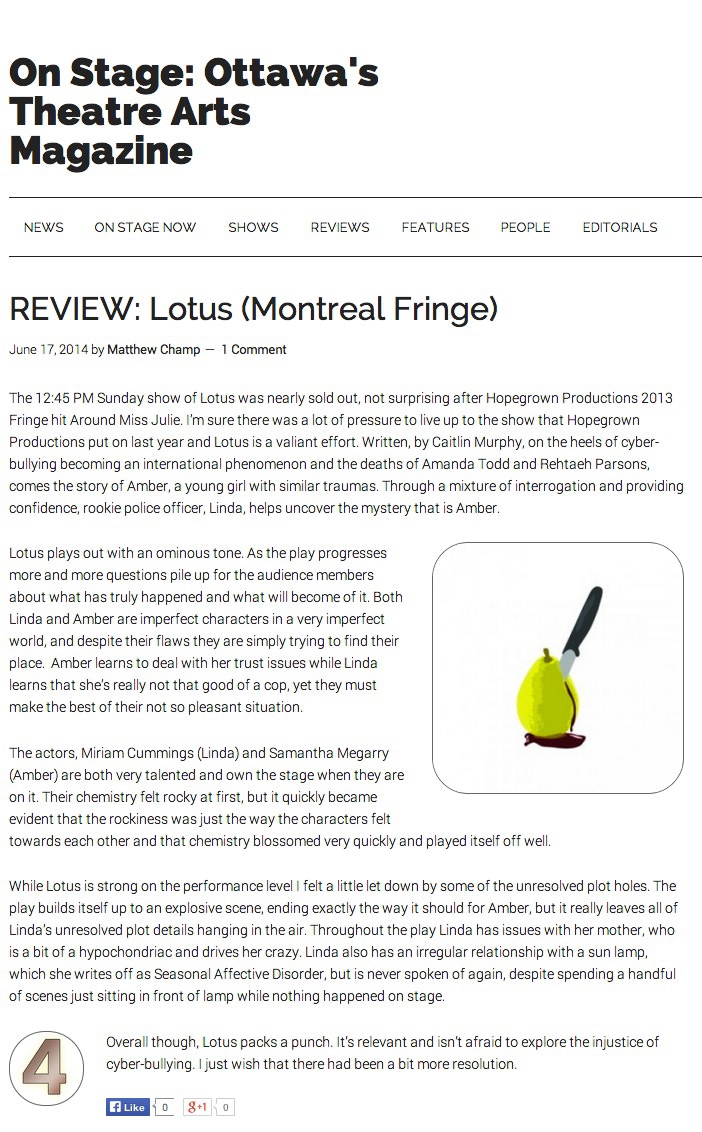